The title says it all.

If you know me at all, you know I’m not a good cook, chef, baker, or any other synonymous words. (Also, if this post isn’t great, it’s because I’m watching Fallon. But it should be more pictures than words.) 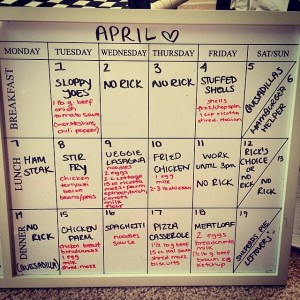 Since I’m not great at cooking, I wanted to push myself out of my comfort zone and try to cook a meal a night for a month. Yes, yes, I know, April isn’t over yet. But my whiteboard calendar only had enough spaces to fill 20 days, so I have to re-plan the next month soon. (I’m doing it again, so that should give you a clue as to how it went!) It wasn’t all rainbows and butterflies, however. Stay tuned for my total fail of a meal, though.

The schedule wasn’t set in stone, so there were multiple days that we went out with our families or went home or just ate leftovers instead of cooking. I also didn’t cook when Rick would be at work in the evening, because…why make a meatloaf for one person?

My first meal: Sloppy Joes! (Is there an apostrophe in sloppy joes? joe’s? I’ll go with no.)

It’s pretty easy to make sloppy joes, so it was my first meal where I was able to dip my toes in. It was pretty easy, except we 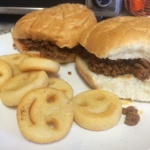 ran into a small problem when I had frozen 4 pounds of ground beef in one big chunk. So Rick had to saw out a piece of the beef,  taking some Styrofoam with it.

It ended up being quite delicious, I think at least. Rick agreed, but he may have been lying (which is what I’ve been worried about all month). We both went back for seconds, and definitely could have eaten more. The finished product….

Not too shabby. My next victory was stuffed shells – they may have been my fave of all the meals I prepared. Unfortunately, I had to thaw a bag of spinach in a very short amount of time, so I was forced to take drastic measures.

Like turn the stove on and put the plastic bag right next to the burner. I tried actually putting the plastic bag onto the burner, but, yes, it did immediately sear a hole in the bag. I also had to crack eggs and put them in the filling. Well, when you have brown eggs, you really see how much shell goes into the bowl. Oops. 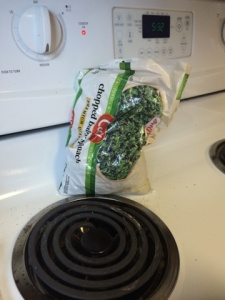 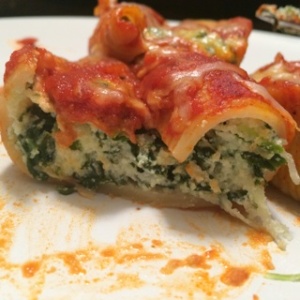 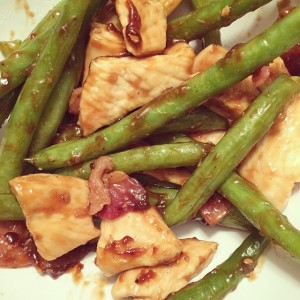 The stir fry was Ricky’s fave, and that was another meal that was so easy it surprised me. I cooked some chicken and bacon, then threw it in a pan with green beans and teriyaki sauce, and bam, an awesome dinner. I wish I would have thought to make some rice or something else to go with it, but I’m definitely still counting this one in the W column. (Can you tell it’s baseball season?)

My bestie and roommate was imperative to the success of the veggie lasagna. She helped cook stuff, peel stuff, and cut stuff. Basically, she did most of it. Thankfully, she ate some of it too. The recipe made SO much, we had so many leftovers that we couldn’t eat all of it soon enough and had to throw it out. 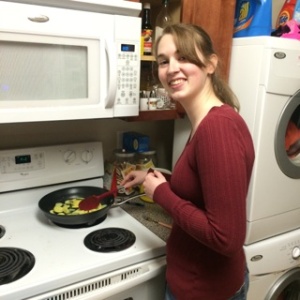 FAIL. FRIED CHICKEN WAS A FAIL. We got drumsticks, and basically, the chicken skin was still on the end of it. I couldn’t handle that. So I asked Rick to do it. Rick couldn’t handle that. He was so nauseated that he had to lie down on the floor and close his eyes. I mean, it was just nasty.

We tried, in spite of that, to cook it anyway. “We’ll just know not to eat the end near where the skin is!” Thanks for the advice honey, but I still know it’s there, and it’s a no-go for me. We had a few chicken breasts that we tried, and they were…fine. Not good, not bad. I think part of the problem there was that I followed the wrong recipe.

See, in the recipe book, there are 3 different recipes for fried chicken. And I think I mixed two of them up and did mostly the wrong one. So, it’s totally on me, I will shoulder all the blame for the loss. After cooking the chicken for a good amount of time longer than the recipe called for, it still was just…not fried.

My wonderful boyfriend was so encouraging. “Let’s just call this one- it’s the only bad one you’ve had!” 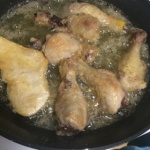 if it weren’t for him, I would have felt like a total loser. But he was super cool about it and was not upset that it took like 5 hours to get him his dinner. After we called it, we decided on Papa John’s. I thoroughly enjoyed my bacon and pineapple pizza, but poor Rick was still traumatized from the chicken skin and didn’t eat too much.

I felt terrible then, and I feel terrible now. Lesson learned, just buy chicken breasts. No skin. No skin. No trace that it was ever actually alive.

We really slacked on the last week…I don’t know what we ate, but I rarely cooked. We just weren’t home. I don’t know what we were doin’. I’m looking forward to chicken parm maybe later this week, but when I went to make it, I realized I didn’t have chicken. Spaghetti, of course I made it and it was fine. If I can’t do that, there’s no point in living.

I went to make the meatloaf, but I didn’t have milk or eggs. So that is also going to have to wait. The pizza casserole, however, was ah-ma-zing! Emily also got to eat some of that, but had I known how yummy it would be, I’d have made 2 batches. We ate it ALL, and Rick and I sadly had to split the second helping. 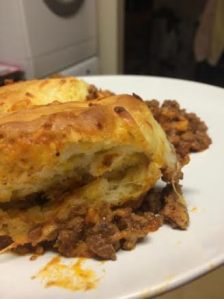 I have no idea why they call it pizza casserole- it’s ground beef, cheese, and biscuits. So really….not pizza. But who even cares what it’s called, my stomach is rumbling just thinking about it. It was incredible. I recommend everyone try it.

I think all in all, my month of cooking was a success! I only had one major flop, and I didn’t mind it. Having Emily and Rick help me cook definitely made it easier and less boring. Of course I’m still on totally basic meals, but you have to start somewhere, right? Right. That’s what I tell myself. 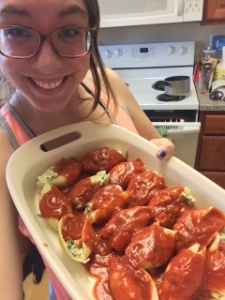 At least I tried it, and I didn’t burn the apartment down. It was only inedible one night, which isn’t too bad. That’s an 88 percent success rate. For a gal whose “thing” is not being able to cook, I did a pretty good job and I’m proud of myself. Maybe in May I’ll venture into creative and difficult meals!

Probably not, but maybe. Stay tuned!