Originally posted on The Roar:
Guys! We did it! It is the LAST week of classes. Hallelujah! I know that we’re all feeling different ways about this. Some of us (me included) are thrilled that class is over and have…

I think we all know the answer to that question.

I read a post from a fellow blogger, Natasha Craig, about what she gave up when she got married, and it was wonderful. I’m not going to give you a spoiler, because I think you should read it. She got married when she was 19, a year younger than I am now. (Yeah, sorry, the blog is still called Nineteen Going on Ninety because Twenty Going on Ninety isn’t nearly as catchy.) Of course, people told her not to and told her all the horror stories, how it would end in divorce, etc, etc. 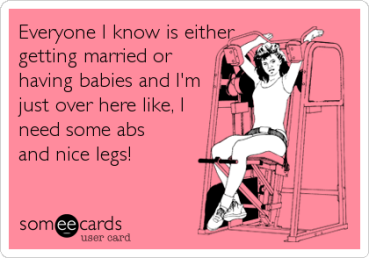 She talks about how she did give up a lot, and what it meant to her. My favorite quote was: “I went home on June 8th in someone else’s car, to sleep in someone else’s bed, and breathe someone else’s air. It would never, from that moment on, be just ‘me’ anymore.” She says that her marriage brings her so much happiness that she even wishes she got married sooner than she did.

I think that’s amazing! But I don’t think that’s for everyone. I don’t think there’s anything wrong with getting married young- God has a different plan for everyone. Two of my best friends got married at 20, and I can’t imagine it happening any other way. But I also don’t think there’s anything wrong with waiting to get married until you’re older. I have friends that have been married for almost a decade, and they’ve said that the first year of marriage is going to be incredibly hard no matter what – you know, “you’re never ready” – so if you’re committed to marriage and staying together, it doesn’t matter if you do it at 19 or 29.

However, I respectfully disagree. Not about the first year of marriage being hard, because I’m sure it will be. I don’t want to share my bed with anyone. Ever.

I also agree that yes, you’re probably never going to be completely ready for marriage. But I’d like to get close to ready, and there’s multiple reasons why I’m not there yet.

END_OF_DOCUMENT_TOKEN_TO_BE_REPLACED

Do you believe in love at first sight? Nick Miller does.

In “Exes,” Nick tells Jess that he fell in love with her the second she walked into the loft. (I’m talking about New Girl here, if you live under a rock or are deaf and blind- the only two valid reasons not to watch it.) While, yes, of course, it’s a sitcom and he has to say that so the audience falls in love with him, it made me think about what love really is, and when you really know you feel it.

And that’s perfect, because Valentine’s Day is tomorrow. How timely my thoughts are.

Well, it’s one o’clock in the morning, and we should be in bed. Instead, we’re spending quality time watching New Girl (I’m actually in love with Nick Miller, sorry Ricky) and browsing blog templates. Goodnight, world!